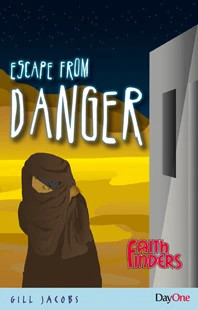 Naomi is a young girl living in Damascus who runs away from home because of her violent step father. The story traces her many adventures as she travels to Jerusalem and struggles to survive alone. The biblical events woven into the story begin at the cross where 'Discovering the hidden lamb' (Gill Jacobs' first book) ends. Naomi is caught up in the events in Jerusalem following the resurrection of Jesus. These events are seen through Naomi's eyes as she struggles with the theme of forgiveness. Can she forgive those who have treated her so badly? This book has been written to help children to understand what life was like for the early church, and the importance of being forgiven and of forgiving others.

Gill Jacobs lives in Hampshire with her husband John. They have two grown up daughters and two grandsons. She has always enjoyed working with children both as leader of the youth work in her church and also as a Paediatric Occupational Therapist. Her own experience of coming to faith as a child and her understanding of child development has convinced her of the need to teach children the truth while they are young. Being married to a converted Jew has given her insights into Jewish thinking and culture.

"Naomi is a young girl living in Damascus during the Roman occupation. She runs away from her violent stepfather and her home and eventually finds herself living in Jerusalem with a family who are employed by a leading Pharisee called Saul. She becomes a witness to many of the events that we read about in the gospels and in the book of Acts, but they are given a new slant as they are seen through the eyes of an outsider. Naomi's personal story takes her from unbelief to repentance and faith in this story aimed at older girls. Those who are familiar with their Bibles will enjoy recognising familiar characters, and those who are not will find out about the events surrounding the Crucifixion, the Resurrection and the birth of the early church. A good Sunday School prize."
Alan Hill
GoodBookStall